Reviews of the Best Powered Subwoofers

This means, there’s only one piece of equipment you’ll need to find a mounting place for.  Some of the best powered woofers are known for being very compact, so they won’t take too much space in your vehicle. While these subs can be huge difference makers in terms of bass quality, their smaller drivers and the included amps might not deliver all the sound power you want,especially if you’re seeking really big bass.

However, their compact size and ease of installation is what makes them a great add-on to your stereo system. Finding the best powered subwoofer can be a bit of a challenge, so we’ve done the heavy lifting for you. Here’s a comprehensive review of the top rated powered subwoofer on the market. Check it out.

Infinity Basslink is one of the best selling and best powered subwoofers out there.  We’ve found that a lot of people who have bought this sub are completely satisfied with what they’ve got and recommend it. Admittedly, it’s a well-engineered all-in-one bass system that’s built with compactness and space saving concept in mind and optimized for high-performance bass.

So, you won’t have to sacrifice all of your available cargo space in order to enjoy the bass.This amplified subwoofer can handle up to 200 watts RMS. The Infinity Basslink combines a 10″ woofer and 10″ passive radiator(also known as a “drone cone”)  – increasing performance and limiting distortion – as well as an impressive Class D amplifier with 200 watts RMS being integrated into the enclosure.

Infinity has incorporated  special circuitry into the subwoofer to control voice coil position and to eventually maintain a linear motion of the cone,so the bass sounds fuller and richer. The Basslink boasts a wide array of controls including variable low-pass filter, phase switch and Bass EQ.  These will allow you to tweak and adjust your bass according to your liking and taste intensity.

And with the included mounting brackets, you’ll be able to mount the rigid polymer box either horizontally or vertically.  This subwoofer also comes with a wired remote control with 16-ft cable to allow you to adjust the sub’s volume from your dash.

They offer a wide range of different subwoofers ranging from 8″ to 15 inch in size, as well as shallow mount subwoofers.  However, they have limited options when it comes to the best powered subwoofer. That being said, the first thing to notice about the P300-12 is its relatively compact size despite packing a pretty huge 12″ inch subwoofer and a built-in class D amplifier.

So if you’re seeking big bass and wanting to save yourself the headaches of matching up a sub with a compatible amp and box while not sacrificing too much space (which hurts the bottom line), choosing this system will greatly benefit you in this regard. Rockford Fosgate has been in the industry for many years, and they’ve gained a well-rounded experience and strong technical knowledge in various areas of In-Car Entertainment including speakers,amps,subs and enclosures.

They also specialize in marine and motorsport audio.  Long story short, these guys do everything, and they do it very well. You’ll be amazed by the powerful impact this subwoofer adds to your favorite tunes, as it’s equipped with a significantly large subwoofer that can handle up to 300 watts RMS, as well as a powerful built-in amplifier.

Several controls including phase switch, bass boost and low-pass crossover allow you to tweak the sub for a better sounding experience.

High- and low-level inputs also allow you to connect this sub to almost any stereo system while the included remote let’s you adjust sub’s bass intensity from the front seats. P.S  : The Rockford Fosgate P300 is also available in 10″ 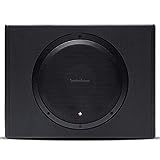 The KSC-SW11 by Kenwood is one of the best powered subwoofers on the market.  It’s actually the smallest powered subwoofer we’ve reviewed so far.  You can even fit it under the seat. It makes a great solution for those who want to enhance their overall listening experience by adding some depth to their music without taking up a lot of space.

As for the Cons, it is true that given its tiny size, it doesn’t reach the superlative performance or big bass offered by sound systems with larger subs, but it certainly seems to bump up against its claimed frequency response range.

The KSC-SW11 feature an 8-1/4″ x 5-1/8″ woofer mounted in a rigid aluminum enclosure that eliminates rattles to some extent, while the built-in amp feeds the sub 75 watts RMS. The KSC-SW11 also comes with a wired remote that allow you to control your sub’s bass from your seat.

Let’s start with the pros. First of all, you can usually find it listed for just under $100 at most stores and retailers; it’s a great starter subwoofer that won’t break that bank.  Experienced audiophiles won’t be disappointed with this sub either.

It can seriously deliver awesome bass. One of the things that strikes you first about this sub is its cool blue illumination feature that will make your car look as great as it sounds. The SBP8A features an 8″ subwoofer than can handle 80 watts on continuous basis.

It can reach as low as 20 Hz, which is the very lowest level of human hearing.  Lower frequency response produces a fuller, richer sound.

When it comes to cons, we couldn’t find many except for the fact that RMS power handling is a bit lacking when compared to some other subs we’ve reviewed ,but given the size of the woofer, we assure you that it’s totally acceptable. 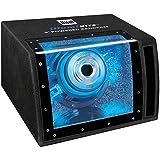 Advantages of Having the Best Powered Subwoofers

Aside from just being more compact, there are a lot of advantages to using this type of subs.

How do I find the Best Powered Subwoofers for my Vehicle?

When you’re shopping for a powered subwoofer, there are a number of factors you should consider.