When you’re shopping for a new car amplifier, the very first questions that you should ask yourself are, how am I going to use it?  Am I going to power a whole sound system which comprise of multiple speakers and subs? Or just one sub? One pair of speakers or a couple pairs of speakers? Maybe both speakers and a sub?

Asking these questions will help your narrow down your choices and help you select the right amplifier for your vehicle based on the number of output channels and how much power your components can support.  Car amplifiers come in different models with different number of channels. For this guide, we take a look at some of the best 5 channel amp you can use to upgrade your sound system.

Why Use a Multichannel Car Amplifier?

Our reviews of the best 5 channel amp First up is the Kenwood KAC-7005PS, which is a pretty solid car amplifier on its own – it’s probably considered to be the best of Kenwood’s 5 channel amps, bar none.  It can drive your entire car audio system giving it the boost it needs.

Kenwood, a brand we are rather enamored with, makes some of the best car stereos in addition to the best car amplifiers. If you happen to pick up one of their impressive stereos, you might want to get this amp to accompany it (though if you like, any other stereo will work with this amp).

The Kenwood KAC-7005PS can deliver up to 40 Watts of output power to each of your front and rear speakers on a continuous basis and up to 300 watts RMS to your subs – this will result in crystal, clear, and rocking sound in your car.

Another positive to the KAC-7005PS is the flexibility it offers – for example, if you’ve only got a set of speakers that you want to drive, you can simply bridge the amp into 3-channel mode and send 100 watts of RMS power to each of your speakers.  As we’ve already mentioned, the more channels your amp has, the more flexibility it offers.

To keep this amp working at optimal temperatures even under extreme loads, Kenwood incorporated a cooling option which comprises of a cooling fan – sometimes up to 2 fans on some models, as well as a rugged cast-aluminum heat sink for extreme heat dissipation.

In addition, this versatile amp also features separate adjustable crossover filters on all of its channels, not to mention a built-in variable bass boost on sub channel for up to 18 dB of low-frequency thump.

The only downside, conceivably, is the relatively low RMS power rating makes it a bit lacking especially if you have high-performance speakers that require more power than what this amp can put out.  Other than that, this is a great amp to add to your sound system. However, despite that you’ll have to shell out some serious dough if you wanna get this, it definitely earns its keep when it comes to performance and reliability.

This model includes variable high and low pass filters to take full advantage of both your speakers and subwoofer.  It also comes with speaker level inputs – these inputs allow you to hook this amplifier up to almost any head unit including a factory head unit.

The R600X5 offers long-term reliability and provides superior sound quality.  Its heavy cast-aluminum chassis incredibly contributes to heat dissipation by drawing heat away from the internal components making the amp running at its peak performance at optimal temperatures.  Long story short, this is one of the best 5 channel amps out there. The brother of the R600X5, the main difference between that amp and this is its performance.  That’s identified by Its RMS coming in at 75 watts RMS per channel along with up to 150 watts RMS on sub’s channel with the amplifier output impedance being set at 4 ohms.

The advantage of this is that you can drive a couple pairs of high-performance speakers as well as a powerful subwoofer.

Additionally, the sub’s low and high pass filters are powerful features that come in handy for getting the right sound from your sub(s).  The amp’s high-pass filters can be used to trim off low frequencies from your full-range speakers so they’ll play more efficiently.  The low pass filters do the opposite – they filter high frequencies.

If you happen to have a very powerful pair of speakers and a subwoofer; you can switch this amp into 3 channel mode to drive your speakers with 250 watts RMS while sending 500 watts to your subwoofer. 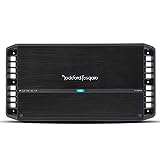 The Planet Audio AC1800.5 is one of the best multiple channel amps out there.  It’s slightly less expensive, but it’s a solid amplifier that’s worth every penny.

So what makes this a solid amp?  Basically, its power handling coming in at 210 watts for all of its four channels when the amp is configured for 4 ohm impedance load.  That’s a huge amount of power.  The price also makes it perfect for budget-conscious audio enthusiasts looking for a good amp to drive their entire sound system.

It can be a bit of a challenge to find a decent amp that won’t totally break the bank.  While most of the best 5 channel amps are priced at over $190 easily, the AC1800 is very affordable.  However, it does not forfeit quality for price.  It’s one of the best amps at this price point.

For some people, music is the driving force of their lives.  Planet Audio built this AC1800 5-channel amp to send 210 watts RMS to both your rear and front speakers, plus up to 420W RMS to a sub, so you can hear and feel the musical joy.  You can also bridge the amp.  If you’ve got a pair of speakers and very powerful subwoofer that requires tons of power, you can switch the amp into Tri-Mode and increase the power output to the subwoofer.

The built-in high- and low-pass filters come in handy to let you adjust your amp’s output, so your speakers and sub(s) deliver the music you’ve been missing.  The built-in Variable Bass Boost is also a great feature.  It gives you control over the amount of bass you want to pump out to your sub(s). 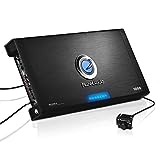 The OA1100.5 by MB Quart is another great multiple channel amp.  MB Quart is a brand we haven’t come across very much at all, but we were quite impressed when we did, and we think you will be pleasantly surprised with it as well. After much review, we can say that this has a place for one of the best 5 channel amp out there.

I admit that although this amp’s price is fairly steep, it provides an excellent damping factor, and if you’re here, then that is important to you.

MB Quart has been in the business since 1962 until acquired by Maxxsonics in 2005. They are known for providing high-end products for people who don’t mind shelling out a few extra dollars for added benefits. If you are looking for the best 5 channel amp for your small car, this top-quality amp from the popular Pioneer brand is a great place to start.

The GM-D9705 5 channel amplifier does not disappoint. In fact, this amp is one of the best Class D car amps out there. Its small size does not compromise its performance. It is a versatile full range amp capable of powering your entire speaker system. You can use it to power your front speakers, rear speakers, plus one subwoofer.

This amp can also be bridged to various speaker configurations. On top of that, this amp is very powerful. It has a max power output of 2,000 watts and sends 100 watts to each of the four speakers and 350 watts to your sub at 2 ohms.

In a nutshell, the Pioneer GM-D9705 is a solid amplifier with decent performance. If you are all about the bass, then this is the amp is worth considering. Its boom is guaranteed to shake your car and that of your neighbors too. 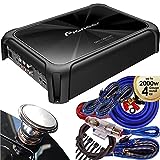 Though Rockville is a relatively new brand in the car amp market, Rockville is gaining popularity fast. And to prove its ability, this brand has come up with an equally great 5 channel amp that matches the standards of other giant brands such as Alpine, Pioneer, and Rockford Fosgate.

Rockville dB55 is a CEA 2006 compliant 5 channel car amp with an unbeaten performance at its price point. This amp has a 4,000Wpeak power rating and works flawlessly to give a loud, clear, and crisp sound.

Additionally, Rockville has the needs of each of its users in mind. The amp has a 12dB bass boost control plus high, low, and subsonic filters. Plus, the optical coupler ensures the smooth operation in either class A/B or class D.

You can rest assured that your entire car system will be powered by a powerful 2000W amp that gives distortion-free audios regardless of the volume or genre. To wrap up this list of the best 5 Channel Amps is another surprising entry from BOSS. This amp will impress any audio enthusiast with its great features.

To begin with, the BOSS audio system PV3700 5 channel car amplifier has a whopping max power rating of 3700 watts. You can rely on this 5 channel amp to power you’re the entire stereo system of your car.

And, to set the music mood in your car, this amp has multi-LED backlights which are perfect for accentuating any space. Are you looking for an amp that will add a punch to the music in your car? Consider the BOSS audio system. 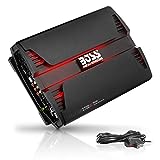 As you can already tell, you’ll be spoilt for choice when searching for the best 5 channel amp. The options available are numerous. That’s why we could not narrow down to only one best 5 channel amp. Instead, we came up with a whopping 8 options for you to choose from!

All the options on this list are great. And you cannot go wrong with either of them. However, the best one for you will depend on the power rating of your speaker and subs.

Some of the powerful amps on this list like the Rockville dB55 have an impressively high power rating of 2000 watts. Others like the Kenwood KAC-7005PS have a lower power rating but its performance and reliability remains unmatched. Enjoy!