Unless you own a high-end vehicle, equipped with an expensive brand-name factory stereo option, your standard factory-installed stereo isn’t going to be anything to write home about. Fortunately, you can buy a new car stereo and breathe a new life into your sound system.The first step along that path is to choose a new head unit that incorporates as many features as you want. By buying a new head unit you’ll be able to enjoy features you didn’t have before, such as Bluetooth wireless streaming, MP3 compatibility, MIXTRAX Illumination and more .

If you’re on the lookout for a single din head unit that meets your needs and fits your car, and in order to make an informed decision, there are a few point that you might want to be aware of before you go online or to the stores to embark on your quest.

You’ll certainly need a head unit that can play various digital media types, such as MP3, WAV and WMA files.Some head units are also be able to play AAC files which are the standard media type of audio files downloaded from iTunes.Moreover,you’ll also want to look for a head unit that is HD and satellite radio ready.

Some of the best single DIN head unit features the ability to change their illumination color. It’s actually a very good feature that let’s you match up you headunit to your vehicle’s dash,adding an elegant and refined touch to your car’s interior.Additionally,and more importantly,you’ll need to consider whether or not you can control the brightness of your head unit.

For security and anti-theft purposes,you might also want to purchase a head unit with a detachable faceplate.Along with this convenience,make sure your head units comes with a remote control for maximum comfort.
Also, if your car has stereo controls on the steering wheel,look for a head unit that support this option.Stereo control on steering wheel are very convenient!

Here are our recommendations for the best single din head unit!

Any of these single head units would be great buys. Much of it boils down to personal preference. Like with any product, you can get some really great head units if you’re willing to spend a bit of cash, but there really are great products in every price range.

When it comes to car stereos there really isn’t many more trusted companies in the market than Pioneer. Pioneer has been making car stereos for several years, and they have gained quite a fan base during that process. We have reviewed tons of Pioneer products on this site. We believe that Pioneer makes a great product,and this head unit is no exception.

Additionally,this reasonably priced head unit features a multi-line LCD display with LED backlight which is 35% larger than the previous models,resulting in great visibility and legibility.To put it simply, the Pioneer DEH-X6600BT has a great mix of style, form, and features.

We have been happy with Pioneer DEH-X6500BT through this process and we highly recommend it.

Another contender in our lineup of the best single din head units is the JVC KD-R840BT.Well, it’s no secret, JVC just makes great sound systems.

This head unit is no exception. This head unit’s price is a bit higher, but it’s not as high as some of JVC’s top models.

At around $115, it’s not outrageous – and if you are an audiophile, it could be a great investment.

JVC KD-R840BT has been praised for its slender and sleek design, coupled with every feature you could dream of including built-in Bluetooth for wireless synching,PANDORA® Internet Radio,as well as a remote control for maximum convenience and comfort.

While most car stereos with Bluetooth can only be paired to a single phone at a time ,JVC went the extra step and built this headunit so it can support up to two phones at once which is what we love most about it.

When a call comes in , your headunit will blink either blue or red, depending on the phone.Furthermore,if you’re an Android user , you’ll be able to control your head unit via Bluetooth® like a wireless remote control using an application called “JSMC” .

This application displays your receiver’s source information on the smartphone’s screen, allowing you to command basic controls (Play/Pause/FF/Rev/Random/Repeat/Search) simply by voice command or by finger swipes and gestures operations on the screen of the smartphone — for example, tap the screen to play and pause, or swipe right or left to go forward or backward.

For your safety it’s highly recommended that you mount your Android phone in a way that you can easily reach it without taking your eyes off the road.

Pioneer is at the forefront of car audio technology. They have an awesome reputation among mobile audio enthusiasts, and their in-dash receivers are always a good bet. Pioneer DEH-X3600UI is actually one of their best selling and the most highly rated single din head unit, even tough it lacks some features.

Pioneer has packed this receiver with the best and most desirable features including MIXTRAX technology, Pandora control through iPhone,a built-in MOSFET amplifier and a remote control for maximum convenience and versatility.

That aside, we have come across a ton of you who have used and loved Pioneer head units. The head unit linked to above seems a bit expensive when compared with other models available in the market.

However, this head units comes with plenty of features and a well designed front face, which speaks for itself. If elegance and quality mean anything to you, we would recommend giving this receiver a try.

While there’s plenty to like about the Pioneer DEH-X3600UI, its appeal is undermined by its lack of Bluetooth connectivity and HD radio capability. Don’t let the lack of some features fool you.

Pioneer DEH-X3600UI is still a fantastic product! Pioneer specializes in just that… Improving your overall listening experience(obvious and cheesy fact, but it had to be said sometime).

If you are not into complicated sound systems that involve amps, subs, equalizers, the built-in amp at the heart of this head unit is powerful enough to power your speakers.

Otherwise, the high- and low-pass filters built into the unit will come handy if you’re building an evolved, expandable sound system with amps and subs.

Alpine CDE-HD149BT is a simple stereo but with very complete functions to meet the different needs of modern drivers. It has an attractive and easy to navigate LCD display. The car stereos have a CD noise signal, AM / FM tuner plus it plays songs in MP3 via Bluetooth and USB .

The sound is powerful thanks to the four 50 watt speakers each. The stereo has USB input, which allows you to connect iPod, smartphones and tablets to listen to any audio of your choice. In addition, the installation process is a breeze.

As a music lover, you won’t find any better car stereo, thanks to its high-quality signal that deliver uninterrupted reception. It has a dimension of 6.3 x 7 x 2 inches and a weight of 3.31 pounds coupled with a single DIN.

You can easily connect your smartphone via Bluetooth with this car radio so as to use it in hands-free mode. The 9-band parametric equalizer allows you to customize the audio to suit your tastes. For cars with limited spacing for a single DIN headunit but want Bluetooth capability, this is the perfect device.

Kenwood is a brand known through the world for its quality, which we also found in this car stereo. Here, drivers can count on its affordability.

This device is one of the cheapest currently available in the market. And this doesn’t translate into low quality or lack of functionality.

Besides the affordable price of this device, it’s also ideal for those whose car has no space for 2-din models.

It delivers maximum power of 50W for each of the four speakers and the sound will still be crystal clear.

Kenwood is a brand known through the world for its quality, which we also found in this car stereo. Here, drivers can count on its affordability. This device is one of the cheapest currently available in the market. And this doesn’t translate into low quality or lack of functionality.

Thanks to the Aux and USB inputs, you can connect smartphones and MP3 players to listen to the stored music. Also, the display text is very easy to read, making it much appreciated by motorists.

This item compact shape is equally efficient and suitable for playing music in a pleasant and simple to use way. It is convenience to operate. It’s the go to choice for those who spend a lot of time in the car and need to relax. Also, it is compatible with majority of the audio formats currently in circulation.

Pioneer DEH-150MP Single Din is one of the best car stereos designed to provide you with comfort while driving. This is possible, thanks to its CD playback capabilities, USB, Aux, Bluetooth, and smartphone compatibility.

The Bluetooth technology gives you access to stream music from your smartphone. It helps you to manage both incoming and outgoing calls, talk safely and send audio files. You can also connect your phone via the USB port, and listen to your favorite tracks in different audio formats.

Thanks to the total power of 200 Watts, its sound is even full-bodied. In addition, it has a minimalist aesthetic design to complement your car interior. The MOSFET amplifier helps to optimize optimal listening in every situation.

This item is pretty easy to set up and install and it offers great functionality with crystal clear sound. Also, it has a sturdy build with a bit and crisp screen. All in all, the sound generated in the car is certainly of great quality.

This model is one of our choice in the search for the best single DIN car stereo of the moment. The device has an elegant design and various options to access your favorite music and radio channels. It incorporates USB port and Bluetooth connectivity.

The Boss Audio 616UAB Single DIN Head Unit is an excellent car stereo unit. This model is one of our choice in the search for the best single DIN car stereo of the moment.

The device has an elegant design and various options to access your favorite music and radio channels. It incorporates USB port and Bluetooth connectivity.

The Bluetooth connectivity ensures easy connection with any mobile phone, both for playing files and talking in hands-free mode. Its preset built-in equalizer allows you to adjust the sound style to make your journey memorable with digital music.

The car radio reproduces the sound at a maximum power output of  50 watts x 4 to deliver everything clearly. It’s capable of reading different audio formats including WMA, MP3, USB, and smartphones, offering high-quality in all these cases. And besides, you’ll not lose your station and live streaming, thanks to its strong signal.

You’ll find it easy to control all its functions directly from the front keypad or using the remote. It’s pretty easy to setup and you’ll not have to complicate your life to install the car radio. It doesn’t have an RDS function, which is responsible for displaying stations name. Although, this is not particularly serious. 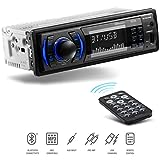 Car radios have greatly evolved that they’re now built with CD players, touch screens, USB ports and more. The single DIN car radios presented above are some of the most popular brands currently in the market. Such that, if you want to buy a versatile and high-quality car stereo, you won’t find it difficult to purchase.